18 May 2014
In Flask-Admin, you can override the "on_model_change" function to to automatically populate a "modified_by" field in your model.


Those do a lot of the work of starting a new Flask project for you.

As a warning, cookiecutter flask and overholt include a lot of stuff. I ended up not using it because it was too much work to change everything to work with oAuth.

I created an app that allows you to upload a pdf and it returns a copy of your PDF with the page order reversed. The code is here: https://github.com/pawl/pdfreverse

Initially when I googled how to do this in Adobe Acrobat, the first few results had fairly complicated solutions. After I made the app, I ended up finding an easier way to do it in Adobe (in the 6th from the top Google result on “reverse pdf order acrobat”…): 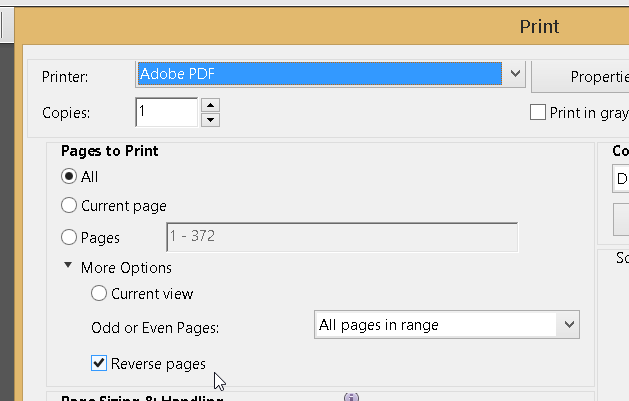 Oh well, it was a fun project.

While tested out Discourse, I only found a few negative things:

As a forum, this beats the crap out of PhpBB, but as a mailing list it’s not a clear winner over Google Groups yet. It’s open source, has a better web interface, and the “Categories” are a cool feature for keeping all the lists in the same place. But, the “email in” functionality was too recently implemented, and it might take a few months before it’s as polished as Google Groups.

It’s going to be a very tempting replacement if they add default settings for user preferences.

28 Apr 2014 I was getting this error when trying to connect to a sybase database using Microsoft's odbc driver by using the connection string shown in the SqlAlchemy examples:
DBAPIError: (Error) ('IM002', '[IM002] [Microsoft][ODBC Driver Manager] Data source name not found and no default driver specified (0) (SQLDriverConnect)') None None
The following code worked to connect:
import pyodbc, sqlalchemy

27 Apr 2014 I was getting this error message because docker was refusing to start: Cannot connect to the Docker daemon. Is 'docker -d' running on this host?

This issue was occurring because my kernel was refusing to upgrade, because I was on a VPS. (you need to get your VPS provider to upgrade it for you)

If you're not on a VPS and can upgrade your kernel, try instructions on this page: http://docs.docker.io.s3-website-us-west-2.amazonaws.com/installation/ubuntulinux/

WHMCS Cronjob Not Running On Ubuntu

26 Apr 2014 My issue was the user with the cronjob did not have access to run the cronjob php file. So, I needed to make the new cronjob for the correct user.

This seems to only be an issue with CherryPy 3.3.0, I switched back to CherryPy 3.2.3 and it worked again.

I noted it on their bitbucket issue here: https://bitbucket.org/cherrypy/cherrypy/issue/1298/ssl-not-working
Older Newer